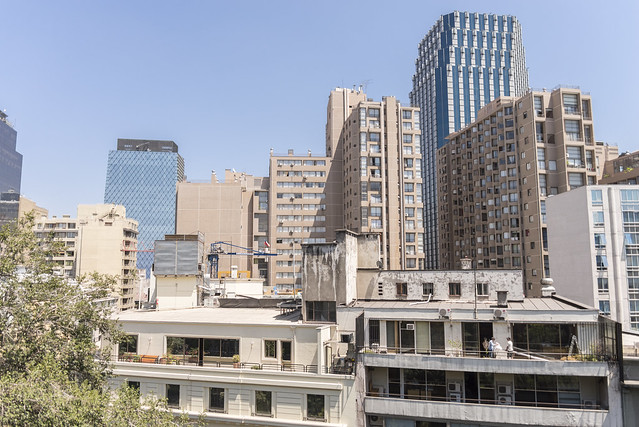 Santiago (Spanish pronunciation: [san̪ˈtja.ɣo]), also Santiago de Chile [san̪ˈtja.ɣo ðe ˈtʃi.le] ( ), is the capital of Chile and the center of its largest conurbation. It is located in the country's central valley, at an elevation of 520 m (1,706 ft) above mean sea level.

Founded in 1541, Santiago has been the capital city since colonial times. The city has a downtown core of 19th century neoclassical architecture and winding side-streets, dotted by art deco, neo-gothic, and other styles. Santiago's cityscape is shaped by several stand-alone hills and the fast-flowing Mapocho River, lined by parks such as Parque Forestal. Mountains of the Andes chain can be seen from most points in the city. These mountains contribute to a considerable smog problem, particularly during winter. The city outskirts are surrounded by vineyards, and Santiago is within a few hours of both the mountains and the Pacific Ocean.

Santiago's steady economic growth over the past few decades has transformed it into a modern metropolis. The city is now home to growing theater and restaurant scenes, extensive suburban development, dozens of shopping centers, and a rising skyline, including the tallest building in Latin America, the Gran Torre Santiago. It includes several major universities, and has developed a modern transportation infrastructure, including a free flow toll-based, partly underground urban freeway system and the Metro de Santiago, South America's most extensive subway system. Santiago is the cultural, political and financial center of Chile and is home to the regional headquarters of many multinational corporations. The Chilean executive and judicial powers are located in Santiago, but Congress meets in nearby Valparaíso.