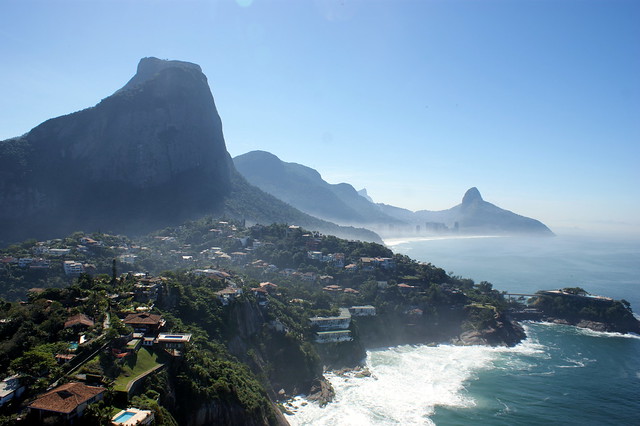 Rio de Janeiro (/ˈriːoʊ di ʒəˈnɛəroʊ/, /deɪ ʒəˈnɛəroʊ/, /deɪ dʒəˈnɛəroʊ/; Portuguese pronunciation: [ˈʁi.u dʒi ʒɐˈnejɾu], January River), commonly referred to simply as Rio, is the capital city of the State of Rio de Janeiro, the second largest city of Brazil, and the third largest metropolitan area and agglomeration in South America, boasting approximately 6.3 million people within the city proper, making it the 6th largest in the Americas, and 26th in the world. Part of the city has been designated as a World Heritage Site, named "Rio de Janeiro: Carioca Landscapes between the Mountain and the Sea", identified by UNESCO on 1 July 2012 in the category Cultural Landscape.

Rio de Janeiro represents the second largest GDP in the country (and 30th largest in the world in 2008), estimated at about R$343 billion (IBGE/2008) (nearly US$201 billion), and is headquarters to two of Brazil's major companies—Petrobras and Vale, and major oil companies and telephony in Brazil, besides the largest conglomerate of media and communications companies in Latin America, the Globo Organizations. The home of many universities and institutes, it is the second largest center of research and development in Brazil, accounting for 17% of national scientific production—according to 2005 data.

Rio de Janeiro is one of the most visited cities in the southern hemisphere and is known for its natural settings, carnival celebrations, samba, Bossa Nova, balneario beaches such as Barra da Tijuca, Copacabana, Ipanema, and Leblon. Some of